What’s Causing Clogs in Your Shower?

Clogged shower drains are a common complaint of homeowners. Unfortunately, daily life leads to plenty of ways that these drains can naturally generate clogged showers. Luckily, there are simple ways to prevent them from happening.

Generally, clogged shower drains are caused by one of four different issues.

Often, especially in older homes, clogged shower drains come from a combination of multiple factors. If one of the causes is present, it is best to check for the remainder instead of just fixing only a portion of the problem.

How Clogged Shower Drains Can Be Fixed

There are many different ways homeowners can fix clogged shower drains. Most of them can be attempted by people with zero experience, and with products available around the house.

For homeowners with more experience, a plumber’s drain snake may be needed. However, there is always a risk of accidental pipe damage if used by someone who doesn’t know how to safely use one. Err on the side of caution and always ask for help from a professional plumber if you’re not sure.

It is not advised to use any sort of unclogging chemicals, as they can be corrosive to the pipes.

Can Clogged Shower Drains Be Prevented? 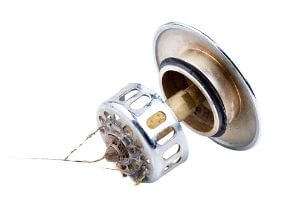 Prevention of clogged shower drains doesn’t have to take time or money. Most prevention tips are quick and easy to start doing right away. For the prevention of hard water, homeowners can install a water softener.

A quality water softener will remove minerals from the water before it enters the shower. In addition, water softeners make clothes softer and drinking water taste better. If the issue is being caused by repeated and preventable hair clogs, a simple wash hair catcher can be placed in the drain. This can be easily removed and cleaned after each shower.

Soap scum build-up can be prevented by pouring a few buckets of very hot water mixed with chlorine bleach down the drain once every few weeks. This will work to strip the insides of the pipes of any potential deposits of grime.

About Ira Hansen and Sons Plumbing

Ira Hansen and Sons Plumbing has offered locally owned and operated family plumbing services to Sparks, Nevada for more than 30 years. They provide bathroom plumbing remodeling, repiping, and water heater repair as well as emergency services. The staff prides themselves on standing by their word, every time.